The previous post about Ginger's Grasshopper Pie was not supposed to be a new post today. It is actually over a week old. Ginger and I enjoyed that project last week. I pulled it up to edit a typo and somehow got it reposted under today's date. But, I was at Ginger's house again last night, and we made a homemade pizza. I spent the night in Little Rock with her on my way home from Texas. Her parents went out for the evening, so we had the kitchen all to ourselves.
This was Ginger's first time to make pizza dough, and she did an excellent job. We went to the grocery store and she chose the toppings that she likes, so we dressed the pizza with Canadian bacon, black olives, and mozzarella cheese.
I didn't document our project last night with pictures, but we both enjoyed cooking the pizza. Watching a child in the kitchen is a lot like watching a child with watercolors or play doh. They smile. They create. They are proud of what they are doing. I'm glad that I stopped in and had another cooking time with her. I hope she'll always remember the times she cooked with her Grammy. I checked out her cookbook collection while I was there. She already has 5 cookbooks. Not bad for a 10-year-old. 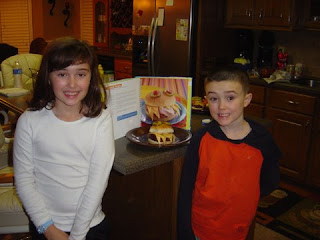 Because I neglected to get pictures of Ginger's pizza project last night, I'm posting a picture of another project she did recently. This was a hamburger that she made for her brother Charlie. She followed the recipe in one of her cookbooks. So much to cook, so little time!
Posted by Anita Rowe Stafford at 10:11 PM