After more than 500 miles and 9 hours of driving yesterday, we finally pulled into our own driveway late in the afternoon. We had a great trip in Gulf Shores with the kids, but it felt good to see the familiar house waiting for us. Home, sweet home. I had worried about leaving my plants in the heat of the summer, so my friend Tammy came by and took care of them while we were gone. One of the first things I did after arriving at home was to go outside and check on the fate of all that I had left behind. Tammy had kept everything watered, and the porch petunias were flourishing. 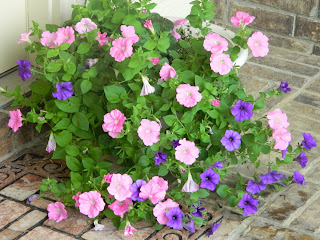 My little sago palm had even opened up some lacy new fronds. 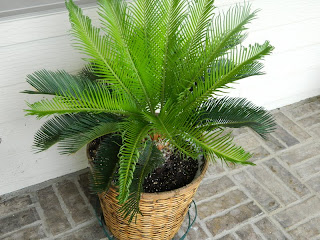 Everything that I had worried about shriveling in the heat was green and thriving.

The nicest surprise, though, was in my refrigerator. Tammy had sent me a text one afternoon while we were away about picking ripe tomatoes. I really wasn't expecting them to look so good when I opened the refrigerator though. 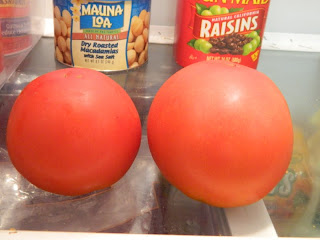 These are the first ripe tomatoes of the season from my tomato plants. Thanks, Tammy, for taking care of them, and the other plants, and the mail, and the newspapers. You kept the whole place running while I was away.
Posted by Anita Rowe Stafford at 9:50 AM