Landon needed new athletic shoes and some clothes for school, so this morning found me pushing through the crowded mall with the other back-to-school shoppers. By the time I made it home, I felt like I had done a hard day's work. As a result, not much cooking has been going on in my kitchen today. Tonight I decided that chip and dip would be good weekend fare, so we're having Hot Bacon Cheese Dip. This recipe is adapted from Taste of Home, but I originally found it long ago in their 2004 January/February issue of Quick Cooking magazine. 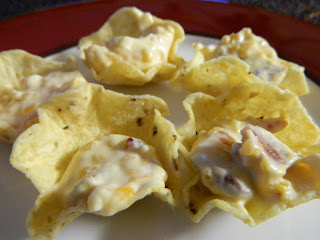 In a slow cooker, combine the cream cheese, cheddar cheese, cream, Worcestershire sauce, onion, and mustard. Cover and cook for two hours, or until cheeses are melted, stirring occasionally. Just before serving, stir in crumbled bacon. Serve warm with tortilla chips or bread. Makes 2 cups. The original recipe made twice this much, so double it if you have a crowd. 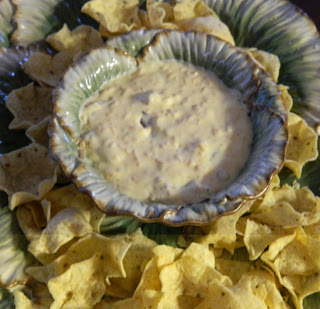 This is a great appetizer to serve if you are having friends over because all the prep is done ahead of time. Cook the bacon ahead, then put the cheeses in the crock pot to melt in advance, and it will be ready when your guests arrive.