Stopping in at The Stackhouse

My taste buds had forgotten what a real hamburger could taste like until I was in Dallas this weekend and had lunch down on Gaston Street near the Baylor Hospital. My sister took me to a place called The Stackhouse, a restaurant owned by her step son Ben and his business partners, and I was reintroduced to hamburgers the way they were made before fast food became the norm. 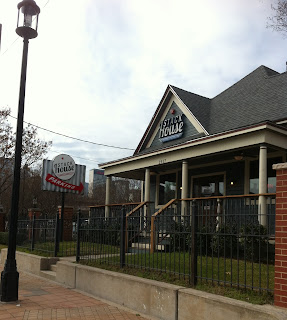 I had a freshly made beef hamburger trimmed with lettuce, tomato, and red onion on a toasted bun with sweet potato fries on the side. It was unbelievably tasty. My sister had the same great hamburger, but she opted for homemade onion rings on the side.

I also saw some beautiful salads coming out of the kitchen as well as other kinds of sandwiches. I didn't get a chance to try their homemade potato chips or fries on this trip, but I hope to be back for another sampling in the future.

They serve lunch and dinner every day at The Stackhouse and the atmosphere is casual. You can choose to dine inside in the dining room or enjoy the fresh air with friends outside on the deck.

Note: I was not compensated in any way for writing about The Stackhouse restaurant. I enjoyed having lunch there.