Yesterday was an an exciting and educational day for me. I was one of 20 exceptionally lucky bloggers to be invited to the Inaugural Bean2Blog. This event was held at the Garden Home and Moss Mountain Farm of P. Allen Smith near Little Rock. The Arkansas Soybean Promotion Board and P. Allen Smith teamed up to show us the wonders of "The Miracle Bean." 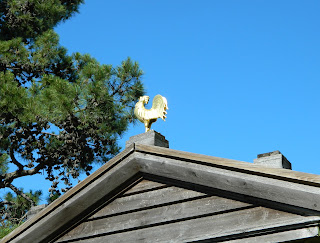 The day started early with coffee, fruit, muffins, and lots of introductions. Bloggers do love to make new friends. The lovely breakfast was spread on a table under a massive 300 year-old oak tree in the front yard of the Garden Home. 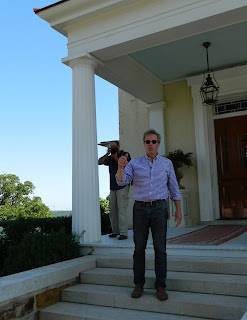 Our gracious host welcomed us to his home, and I'm still pinching myself to be sure I was really there. 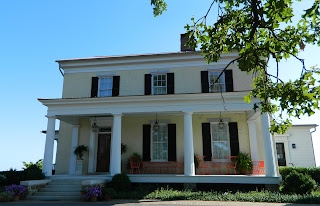 We were given a tour of the entire home, not by a tour guide, but by P. Allen Smith himself, and he lovingly talked about building the house four years ago and the history involved in the choices he made in the construction. As anyone would imagine, the home is tastefully furnished and decorated with an eclectic mix of antiques and newer comfort pieces. We were also given complete tours of the flower garden, vegetable garden, and the newest addition, the rose garden. I'd love to share some of those photos in later posts; I took over 200 photos, I just couldn't stop my snapper finger. 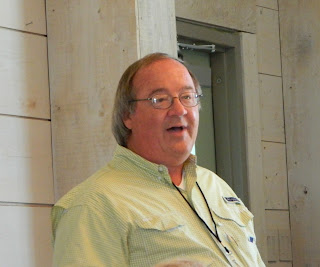 We also heard from several speakers throughout the day, such as Todd Allen, Chairman of the Arkansas Soybean Promotion Board. Todd told us how the potential uses for soybeans have continued to grow from candles to insulation to biofuel. Last year in Arkansas our farmers produced 122 million bushels of soybeans valued at $1 billion. 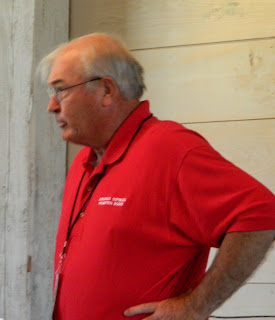 We were also privileged to hear from Jim Carroll, a 4th generation farmer from Brinkley and a member of the Arkansas Soybean Promotion Board and the United Soybean Board. His life story was inspirational because of his dedication to farming and to the history of his family. Jim is growing soybeans on the same land that his great grandfather farmed before him. He reminded us that likely all of us had farming in our family history, either in the recent or distant past. I grew up on a farm, and I have a great respect for farmers like Jim. 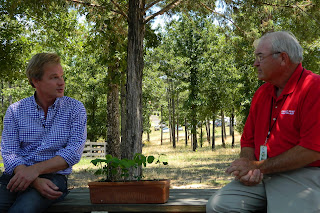 Allen and Jim spoke to the group about planting and growing soybeans. The small plants in the container are soybean seedlings. We learned that you don't have to be a farmer with an acreage to get a taste of soybeans. 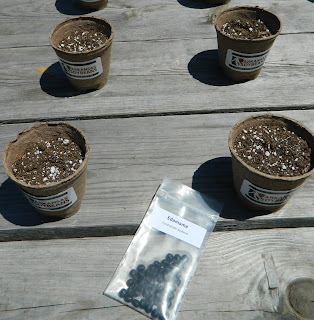 With a few seeds, you could grow edamame in your own garden. 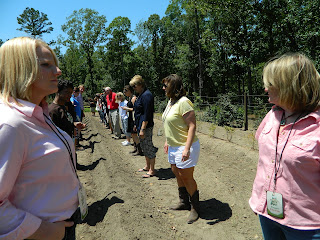 In fact, the Bean2Bloggers planted a row of soybeans in the vegetable garden at Moss Mountain Farm. 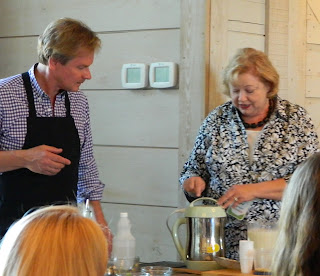 One interesting fact I learned was from Jim Carroll's wife, Rhonda. She demonstrated how anyone can make their own soy milk right at home at the touch of a button with an electric hot soy milk maker, and it was amazing how few beans it took to make a whole quart of milk.

The Bean2Bloggers got a taste of what the speakers had been talking to us about when we were served this colorful and tasty lunch. 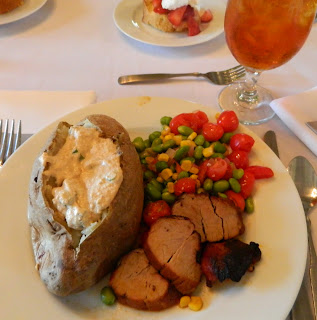 Soy was used in several ways to prepare lunch, from the edamame in the succotash to the pork braised in soybean oil to the tofu and sour cream topping on the baked potato, yum. 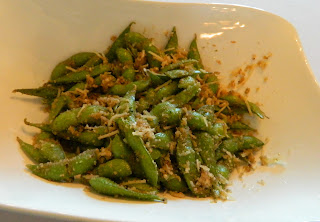 This was an afternoon treat prepared for us by P. Allen Smith - Garlic Parmesan Edamame. I always love Edamame as an appetizer in a restaurant, but I had never had it prepared in this delicious way. Now I know I can make it at home too.

This is just a condensed version of a few highlights of the day, but there is so much more to tell. I'll be posting recipes and more photos from the Bean2Blog 2012 soon.
Posted by Anita Rowe Stafford at 11:08 PM