Last Friday I spent the day in a cooking class learning to bake Artisan Bread. The class was a Mother's Day gift from my son Daniel and DIL Tiffany, and the two of them took the class with me! The class was at The Viking Store in Franklin, TN, so I made a long weekend of the trip to visit them and take the class. 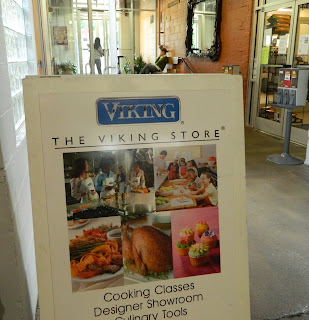 The class was made up of nine students ranging in age from a high schooler to grandmotherly types like me. Two of the students were men and seven were female. 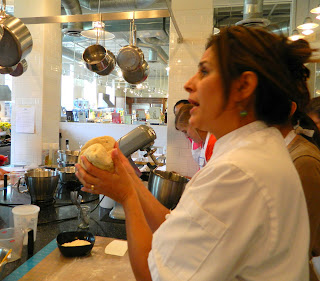 The class was taught by Chef Sandra, and is she ever the queen of multi-tasking. She had timers set everywhere for the multitude of risings and second risings for the five different yeast breads that we baked. This was a hands-on class, so we we given recipes, and Chef Sandra took us through the steps to make Multi Grain Bread, Raisin Cinnamon Nut Bread, Rosemary Focaccia, Brioche, and French Baguettes. 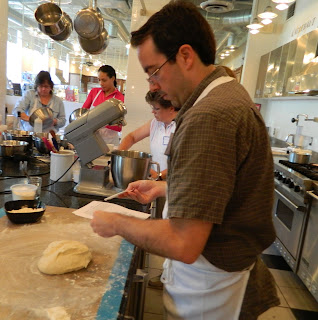 Daniel is checking our recipe for the French Baguettes here. 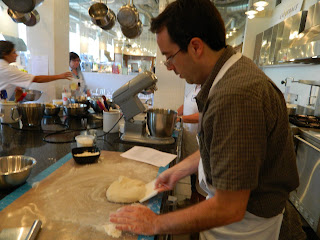 We learned to knead soft sticky doughs like the dough for the French Baguettes with a plastic bench scraper. 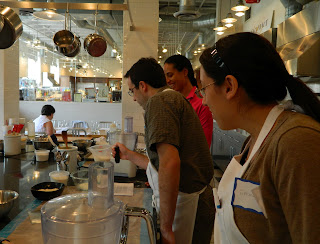 Here Daniel is measuring milk for our Brioche. We used a food processor to mix this recipe, and it was a wonderful soft, sweet bread. 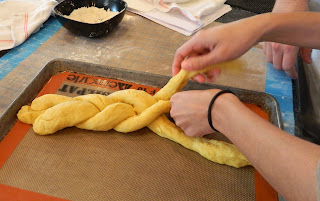 Here Tiffany is braiding our loaf of Brioche.

This is how the Brioche looked when it was braided before the second rise. 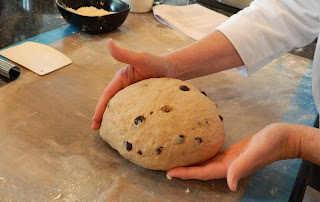 This is the beautiful dough for Raisin Cinnamon Nut Bread that I have just finished kneading. 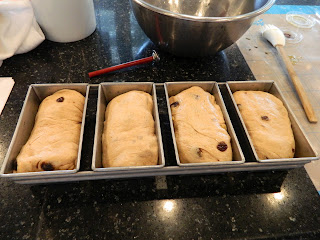 The Raisin Cinnamon Nut Bread made four loaves. This is before the second rise. 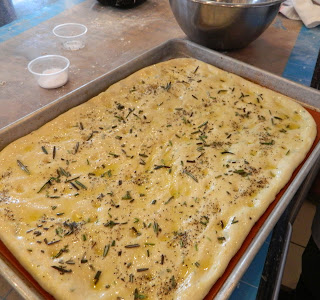 This is our unbaked Rosemary Focaccia. Along with the Rosemary, this bread also had 2 cloves of minced garlic, and its only sweetener was honey. 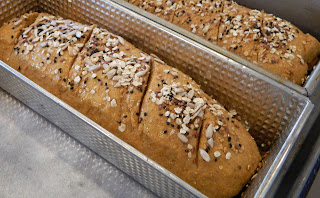 These beautiful Multi Grain Loaves were sweetened with molasses and were made with a mixture of oats, cornmeal, whole wheat flour, and wheat bran. They were topped with sunflower seeds, flax seeds, oatmeal, and black sesame seeds. This picture shows the loaves after slashing before the second rise. 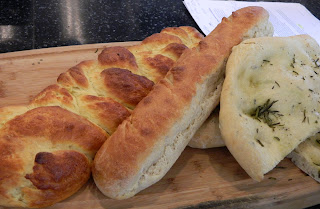 This is a sample of some of the baked items that were made that day in the class. At home, baking one kind of yeast bread can fill up a day, but during the class we were able to turn out five different kinds of yeast breads all in the same day. The class was so much fun, and even though I have baked bread for years, I learned a lot. If I lived nearer to the Viking Cooking School I would sign up for all their classes. The schools are located in various cities, so maybe I will find an opportunity to attend other classes.

I plan to bake all these wonderful Artisan Breads at home now, and I will be posting the recipes for each one soon.