During these past two weeks I have done a lot of traveling and visiting family, and while I was away from home I celebrated yet another birthday. I first made these cupcakes while at my sister's house in Texas for my birthday, then again after I returned home. This recipe is just a combination of cake mix with some additions and a traditional Coconut Pecan frosting along with a touch of Chocolate Buttercream frosting. 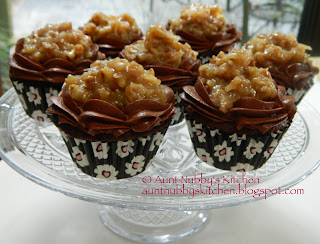 Preheat oven to 350 degrees F. Prepare pans by lining with 24 cupcake papers. In a large mixing bowl, combine eggs, vegetable oil, and vanilla. Beat together with an electric mixer until blended. Sift the cake mix into the mixture. Add buttermilk and sour cream; beat at medium speed for two minutes. Spoon batter into cupcake pans. Bake for 18 - 22 minutes or until cake tests done.

In a large bowl, beat the cream cheese and butter together with an electric mixer until light and fluffy, about 4 minutes. Add cocoa, powdered sugar, and vanilla, beat until smooth. Beat in the milk or cream. Use a 1M decorator tip to pipe frosting around the edge of each cupcake.

In a large saucepan, combine milk, sugar, egg yolks, butter, and vanilla. Cook over medium heat, stirring constantly, for about 12 minutes until mixture is thickened. Remove from heat; add pecans and coconut. Cool to room temperature. Use a spoon to drop dollops of frosting in the center of each cupcake. 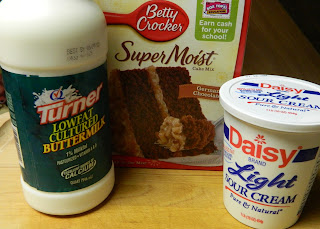 Buttermilk and sour cream "dress up" this cake mix to make these cupcakes extra special. 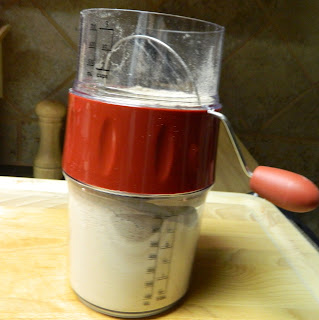 A cake mix will give better results if it is sifted prior to mixing. 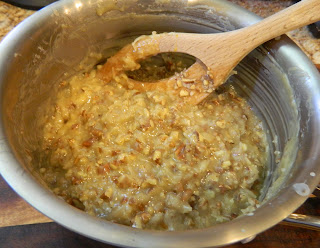 The Coconut Pecan frosting is the traditional frosting for German chocolate cakes, this is just a smaller batch recipe. 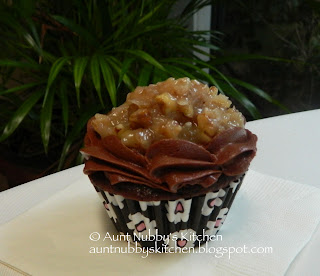 To frost these cupcakes I used a large 1M tip and piped a chocolate buttercream shell border around each cupcake. To finish it off I dropped a spoonful of the cooled Coconut Pecan frosting in the middle. These cupcakes were so good, it was almost worth getting another year older. 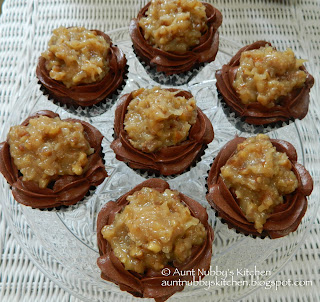 I have also used this Chocolate Buttercream frosting all by itself on cupcakes, and it is wonderful. Just remember to double the recipe if you want to use it to frost the whole cupcake and not just for piping.