Baking homemade bread is not new to me, but French Bread on the other hand has not been in my comfort zone. At least not until I learned how to make it from Chef Sandra at the Artisan Bread class that I took recently. The recipe that was given to us in the class is easy to do at home, and I had success with it the first time I tried it on my own.

Combine the warm water, yeast, and sugar in the bowl of a stand mixer with the paddle attachment. Let stand until foamy, about 5 minutes. Add 4 cups of the flour and the salt, stir until blended. Knead with the dough hook until the dough is elastic and pulls cleanly from the sides of the bowl, about 10 minutes, adding flour as needed, but not too much. Not all the flour may be needed. The dough will be very soft and wet.

First Rise: Turn dough out onto a lightly floured surface and knead for one minute. Form into a ball and place in a lightly oiled bowl, but don't turn the dough over. Sprinkle the top of the dough lightly with flour. Cover with plastic wrap and let rise in a warm place until doubled in size, about 45 - 60 minutes.

Second Rise: Scrape the dough onto a floured work surface. Press flat, knead for a few seconds and return to the bowl. Cover with plastic wrap and let rise again until doubled, about 20 - 30 minutes.

Shaping and Final Proofing: Preheat oven to 450 degrees F. Spray a baguette pan with non-stick cooking spray. Turn the dough out onto a lightly floured work surface; press flat. Cut into either 2 or 4 equal pieces with a pastry scraper and let rest for 5 minutes. Press each ball flat and then fold into thirds. Roll and stretch each into a rope 16 inches long with tapered ends if making regular size baguettes. Place in prepared baguette pan, seam side down. Cover with a kitchen towel and let rise until doubled, about 20 minutes.

Place a shallow pan filled with ice cubes on the lowest rack of the preheated oven. Bake the baguettes until browned and crusty, about 20 - 25 minutes. Transfer the loaves to a wire rack. Serve warm or at room temperature. 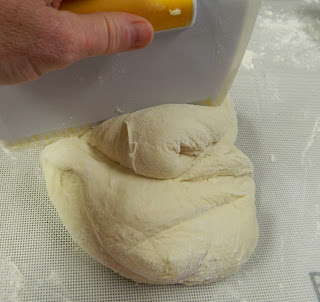 Turn the dough out onto a lightly floured surface and knead for 1 minute. A soft wet dough like this can best be kneaded with a silicone bowl scraper. 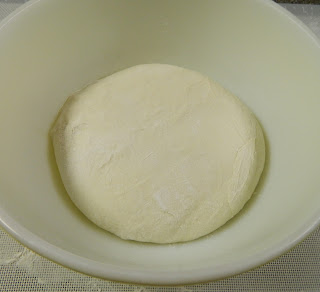 For the first rise, form the dough into a ball and place into a lightly oiled bowl, but unlike most other breads, do not turn the dough over. Dust lightly with flour. 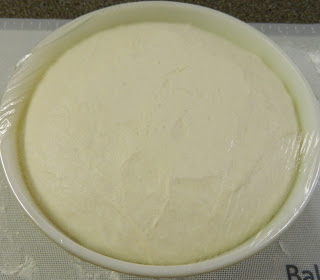 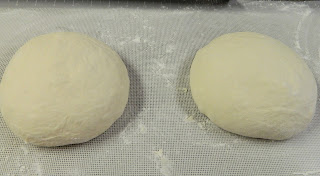 After the second rise, it is time for the shaping and final proofing. To make two regular size baguettes, divide the dough into two equal pieces and let rest for 5 minutes. 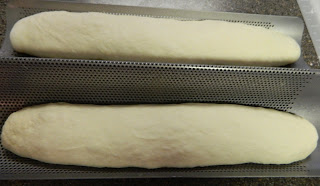 Form the two baguettes and place in the prepared pan. Cover with a kitchen towel and let rise until doubled, about 20 minutes. 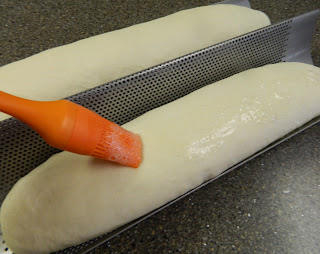 Brush with the egg white glaze. 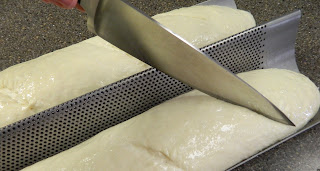 Make 3 diagonal slashes across each loaf. 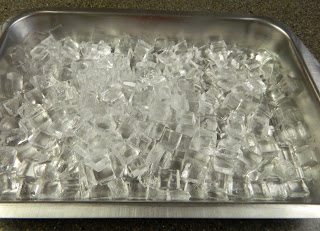 Fill a shallow pan with ice and place on the lowest rack of the oven. 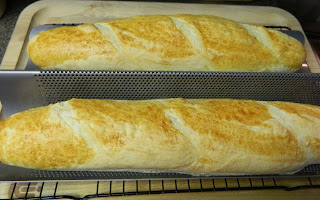 Bake the baguettes until brown and crusty, about 20 - 25 minutes. One point Chef Sandra made in the class was not to bake bread like this on the convection setting of the oven. She said convection was too drying to use with yeast breads. For this French bread she recommends adding the pan of ice for extra moisture while baking.

Posted by Anita Rowe Stafford at 6:58 AM