I have two blueberry bushes in my back yard that I set out last year, so this is the second season for them. They delighted me with some blueberries last year, and I have been looking forward to more of their tasty sweet fruit this year. I have been watching as they bloomed, then loaded up with the green berries, and gradually the berries began to turn to red. In the past week the berries were getting to the ripened, blue, ready-to-pick-any-day stage. I looked at them yesterday as I worked in the yard, but I didn't have my camera handy, so I didn't take any pictures of them at their peak.

Too bad I didn't, because this morning when I went to check on the blueberries this was what I found. 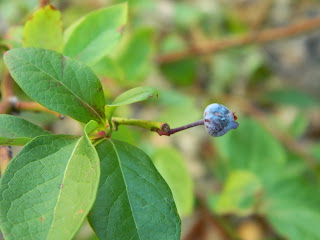 ONE blueberry. And it's not even a perfect one, kind of a puny reject.

It reminded me of the movie Finding Nemo when the dad, Marlin woke up and found that one lone egg. All the rest were gone.

Just as a matter of comparison, look at the difference in the blueberry that was left behind on my bush and one from my refrigerator. 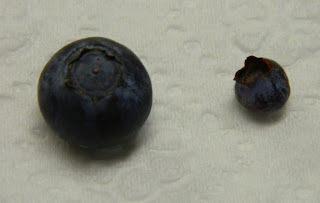 The one on the left is an ordinary blueberry from the grocery store, and the one on the right is my Nemo blueberry. It makes me think of Nemo's one little under-developed fin.

I don't want to blame an innocent party, but I suspect I know who ate my berries, especially since only a few days ago there was an incident with my tomatoes. I couldn't exactly say who was guilty, but my first ripe tomato of the season also became a snack for some creature. 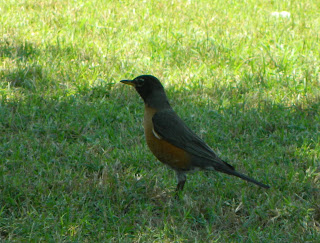 I don't want to point fingers, but this is one of my top suspects.

Next year I will be investing in netting to cover my blueberries so that I can do more than enjoy watching them grow. I had looked forward to eating them too. One of my favorite treats is yogurt topped with walnuts and a handful of fresh blueberries. 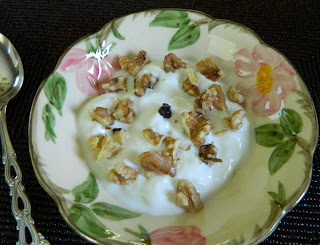 Like Marlin, I will cherish the one that is left, so today I will be enjoying my yogurt with walnuts and a fresh Nemo blueberry.