Playing With My Food

During the past week I have been away from home and learning some new things about cooking. First of all, my sister gave me a lesson at her house on decorating sugar cookies with royal icing. There are so many possibilities for using the techniques that I learned from her, and of course, I had to buy some new cookie cutters in anticipation of future cookies I want to make. I have already made and decorated another batch of sugar cookies since I have been back home.

The second adventure of the week was attending a cooking class. After playing in the cookie dough and icing for a couple of days, my sister and I went to the Viking Cooking School at The Woodlands, Texas, to learn about pizza cooking. I had attended a Viking class once before on baking Artisan Bread, so I was excited to be able to go to another one of their classes. I was not disappointed with the tips I picked up there. 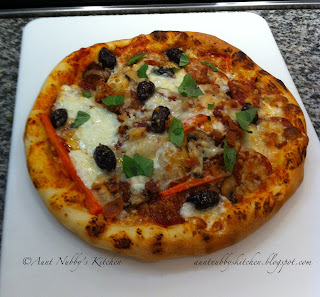 The class was a three hour hands-on workshop, and we baked several different varieties of pizza, including dessert pizza. 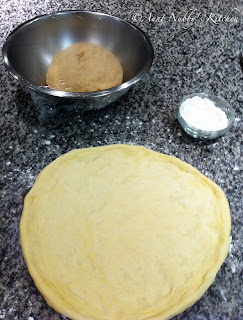 We made both a basic pizza dough and a whole wheat pizza dough for our crusts. I have enjoyed the pizza dough recipe that I typically use at home, but I was impressed with this crust because it was easy to work with. I didn't have any trouble with it becoming too thin in places, or with it wanting to shrink back up after I spread it out. This recipe has been adapted from the hand-out we received in class.

In a small bowl, stir together the yeast, sugar, and warm water. Let sit until mixture becomes creamy, about 5 to 10 minutes.
In the bowl of a stand mixer fitted with a dough hook, combine salt and flour; evenly mix the dry ingredients. Combine the yeast mixture, the room temperature water, and the olive oil in a measuring cup with a pouring spout. With the mixer running, slowly add the liquid; continue to mix until the dough forms a satiny ball that clears the sides of the bowl, about 1 1/2 to 2 minutes.
(Note: If after 1 minute the dough is sticky and clings to the hook, add 1 to 2 tablespoons of flour and continue mixing. If the dough appears dry and crumbly, add 1 to 2 tablespoons of water and mix until the dough forms a ball.)
Turn the dough out onto a lightly floured work surface; knead by hand with a few strokes to form a smooth, round ball. Place the ball of dough in a lightly oiled bowl; cover with plastic wrap and let rise until doubled in bulk, about 1 hour.
Punch the dough down and transfer to a lightly floured surface, then knead briefly by hand. Divide the dough into 2 equal portions for 14 to 16 inch pizzas or 4 equal portions for 8-inch pizzas; shape each portion into a tight ball. Brush each ball very lightly with oil, then cover with plastic wrap and place in the refrigerator for at least 2 hours, or up to overnight. Bring the dough to room temperature before shaping, topping, and baking the crust.

Bake on a pizza stone with your favorite toppings in a 450 degree F preheated oven. 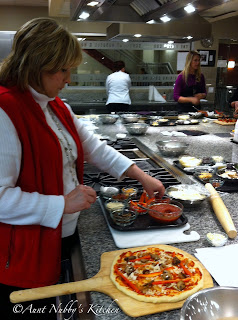 We were given a tray of toppings, and we could choose how we wanted to top our pizzas. Some of the toppings we used were pizza sauce, mushrooms, caramelized onions, pepperoni, prosciutto, bacon, bell peppers, olives, and various cheeses. Here my sister is working on one of her pizzas. 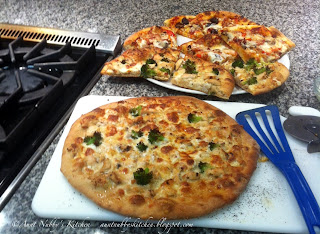 We also made two pizzas with whole wheat crust, and we used a different tray of toppings for these, such as ricotta cheese as a sauce, other cheeses, peppers, chicken, and broccoli. 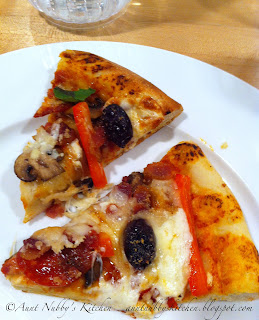 One important part of the class was sampling our work! 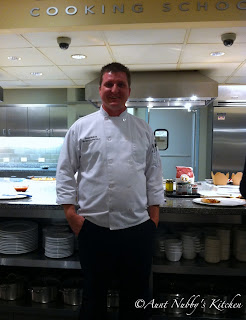 Chef Joseph entertained us and taught us everything he knew about the art of making great pizza. 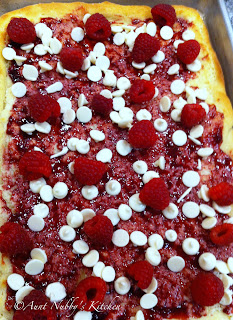 We ended the class by making dessert pizzas. This one is almond cream topped with white chocolate and raspberries. The crust is from the same basic pizza dough recipe above. We baked our dessert pizza on a 1/4 sheet pan instead of a pizza stone. 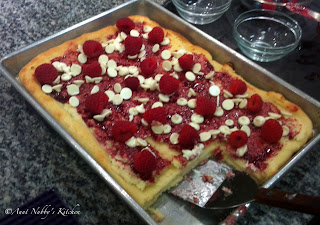 One thing I believe about pizza is that if you get the crust right, you are off to a good start. Beyond that, the toppings are endless. 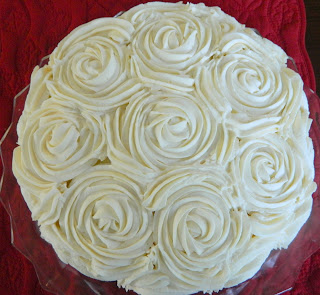