When I think of birthdays I think of cakes, blowing out lighted candles, and getting a year older. When my grandson thinks of birthdays, he thinks of mud and snakes. Landon celebrated birthday number 8 last week, and he had some definite ideas about how he wanted me to decorate his cake. 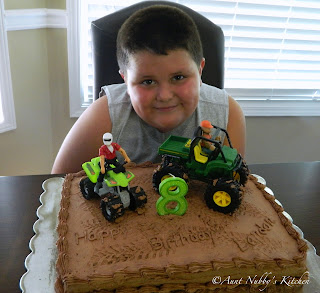 The first cake I made for him was for a family party. This cake was all chocolate and was baked in an 11 x 15-inch sheet pan. The frosting was his favorite Chocolate Buttercream recipe, and he wanted it to have a Gator and a four wheeler playing in the "mud" on top. Once he chose the vehicles for the top, the rest of the cake was a cinch to put together. I used the wheels to "track" up the top of the cake icing and finished with a shell border made with a #22 tip. The script was also written using chocolate buttercream with a #4 round tip. 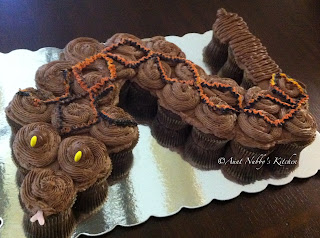 After the family party, Landon had another party with friends. For this party his idea was to have another chocolate cake with Chocolate Buttercream frosting, but this time he wanted it to be shaped like a snake. I thought cupcakes would be an easy serving solution for a group of children, so I put together this rattlesnake from cupcakes. The eyes are yellow M & M's and the tongue is cut from pink fondant.
The cupcakes are frosted with a #4B tip, the eyes are made from a #12 round tip, and the diamond shapes on the back are made by combining copper, black, and yellow coloring with white buttercream then piping through a #16 tip. The rattles on the end are made with a round #7 tip. 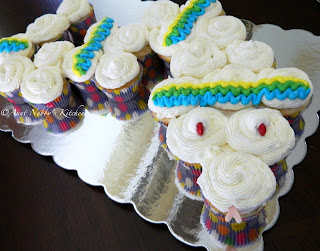 I also made a white snake for the children who didn't like chocolate, but for this one I had to alter the design I had planned. The cupcakes were white, and I frosted them with a Classic Vanilla Buttercream Frosting. My plan was to use yellow, green, and blue tinted frosting to make polka dots on each cupcake, but I couldn't make them that way after reading the food coloring label. 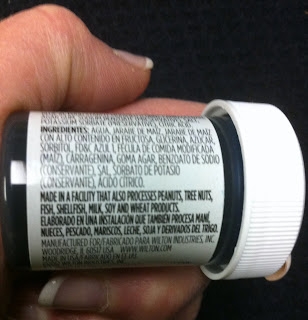 All my colorings had the same warning on the label - "made in a facility that also processes peanuts, tree nuts," etc. Another grandson is very allergic to peanuts and all tree nuts, and I knew he liked the white cake. There was no way I could add the coloring to those cupcakes with this warning on the label. I did however, add a few colored lines for stripes, being very careful to leave many of the cupcakes untouched by the color so they would not be contaminated. Looks like I'm going to have to discard my current food coloring and look for a safe brand.

The cupcake snakes were kid-friendly and easy to serve at the party. 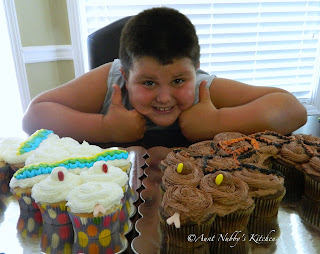 Eight-year-old boys are easy to please, it just takes a little mud and a couple of snakes.